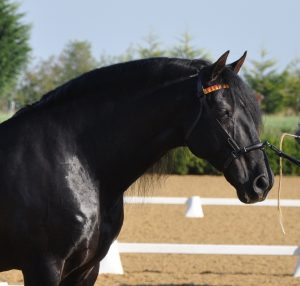 More than just a Spanish Horse

To many, a Spanish Horse is a horse from Spain, an Andalusian horse – they’ve been to southern Spain, heard or read about them. They may even have ridden them whilst on holiday. But the Spanish Horse is so much more.

William Cavendish, the Duke of Newcastle, said of the Spanish Horse (c) 1667​

… the noblest horse in the world, the most beautiful that can be. He is of great spirit and of great courage and docile; hath the proudest trot and the best action in his trot, the loftiest gallop, and is the lovingest and gentlest horse, and fittest of all for a king in his day of triumph.

The Andalusian, now correctly known as the Purebred Spanish Horse or PRE (pura raza española), also referred to as a Spanish Horse, is a horse breed from the Iberian Peninsula, where its ancestors have lived for thousands of years. The breed as we know it today was established in the 16th century, thanks to the efforts of King Philip II of Spain who established the basis for the modern breed, organising the breeding population in Spain and responsible for building the Royal Stables at Cordoba. Over several decades the breed was refined and improved until it was considered to be the perfect horse. The newly created PRE became the emblem of imperial Spain and initially was for the exclusive use of the Royal Family.

Throughout its history, it has been known for its prowess as a war horse, and was prized by the nobility. The breed was used as a tool of diplomacy by the Spanish government, and kings across Europe rode and owned Spanish horses. During the 19th century, warfare, disease and crossbreeding reduced herd numbers dramatically, and despite some recovery in the late 19th century, the trend continued into the early 20th century. Exports of the Spanish Horse from Spain were restricted until the 1960s, but the breed has since spread throughout the world, despite their low population. Today, there are well over 200,000 Purebred Spanish Horses registered worldwide.

An abundance of natural beauty, strongly built and compact yet elegant, with long, flowing thick manes and tails. The PRE’s most common coat colour is grey, but black and bay colours are also common. They are known for their intelligence, sensitivity, docility and superb work ethic.

The PRE is closely related to the Lusitano of Portugal, and has been used to develop many other breeds, especially in Europe and the Americas. Breeds with PRE ancestry include many of the warmbloods in Europe as well as western hemisphere breeds such as the Azteca. Over its centuries of development, the PRE has been selected for athleticism and stamina.

The modern PRE is renown for its versatility. Originally used for classical dressage, driving, bullfighting, and as stock horses, the PRE is used for many equestrian activities, including dressage, show jumping and driving. The breed is also used extensively in movies, especially historical pictures and fantasy epics.

Founded in 1982, under the title of Register II PRE Part bred Studbook, the PRE Fusion Studbook was opened to cater for British Breeders who wished to capture the exceptionally excellent qualities and characteristics of the extremely rare Purebred Spanish Horse (PRE) in their breeding programmes whilst adding attributes from other breeds that would make the resulting horses more suitable to the demands of British riders and competitors. This has resulted in a very adaptable breed which is able to stay popular because breeders are able to adjust the balance of attributes in the PRE Fusion Horses in order to keep up with the ever changing market pressures of the equine industry and hobby. The PRE Fusion Horse Studbook now features many 4th, 5th and 6th generation PRE Fusion horses that excel in a wide range of highly competitive sports, the result of many years of dedicated breeding within the UK.

In February 2019 the part bred studbook converted to the PRE Fusion Studbook and within this new studbook there are 4 sections:

PRE FUSION HORSE: Horses entered into this register will have a minimum of 25% PRE blood. Most part bred horses will be registered into the PRE Fusion Studbook. This studbook also had Appendices for horses that do not meet with the standards that are laid down for the main studbook.

SPANISH SPOTTED HORSE: The goal of the breeder of these horses is to produce a horse with 93.75% or more PRE blood combined with the Lp gene. (The gene responsible for producing a Spotty coat) There are 5 classes within this section:

ALBION AZTECA HORSE: The original Azteca horse has been recognised as the national horse of Mexico since 1972. It is based on crossing the PRE with Quarter horses and Criollos, but an extremely strict registration process makes it almost impossible for other countries to register their horses into the main Mexican Studbook. This has forced other countries to set up their own studbooks. The American Azteca, The Australian Azteca and now in the UK the Albion Azteca. The Albion Azteca has its own breed standards and the ultimate goal of breeders of these horses should be aiming to produce a self-sustaining breed with between 37.5% and 62.5% PRE blood. Horses registered into this studbook are divided into classes: A, B, C and D depending on how much PRE blood is present.

SPANISH NORMAN HORSE: The Spanish Normans were once ridden into battle by Knights, they are big, strong and courageous. The aim of the breeding programme is to recreate these wonderful war horses. The Spanish Norman is based upon crossing the PRE with a Percheron and it is hoped in future years to have a broad genetic pool within the studbook to allowing breeding within the Spanish Norman Breed.

The Hispano-Arab is a Spanish horse breed originating from the cross breeding of the PRE/Andalusian and Arab horses. The Hispano-Arab is well-proportioned and harmoniously made, with a slender outline and light movements. The Hispano-Arab is suitable for equestrian sports such as show-jumping, dressage, cross-country, endurance and TREC and as a working horse for Doma vaquera and herding, its traditional use. BAPSH in the UK has reopened this register on the advice of DEFRA to assist UK and Irish breeders/owners of Hispano-Arabs.

The future is very bright for the Fusion breeds, not only now do they have their own studbooks and breed standards there is a grading system for stallions to ensure these “New Breeds” are developed and improved.

As well as PRE Fusion show classes at the GBPRE Breed Show, GBPRE also run a yearly performance competition to promote The PRE Fusion:
the PRE Fusion Performance Awards. PRE Fusion owners send in competition results to win prizes which are presented to the winners at the GBPRE Annual Breed Show. The PRE Fusion breeds are also eligible to enter the MCI qualifiers (although at this time cannot compete in the European finals). They are also eligible to compete in the British Dressage GBPRE Associated Championships. It is GBPRE’s aim to help promote these wonderful talented PRE Fusion horses so in time they will hopefully be recognised not just in the UK but worldwide as proven sport horses in their own right whilst still keeping the essence of the PRE.

The Menorquín or Catalan: Cavall Menorquí is a breed of horse indigenous to the island of Menorca in the Balearic Islands, from which it takes its name. It is closely associated with the doma menorquina style of riding.

Menorca was under Moorish domination from 903 to 1287. According some sources, research has shown links between the Menorquín and Arab breeds, while others have shown it to be of Berber origin, and yet others believe that it was brought to Menorca from central Europe by King James I of Aragon. According to the Government of the Balearic Islands, it belongs to the eastern group of indigenous Iberian horses which also included the now extinct Catalan horse.

The Menorquín was officially recognised as an indigenous breed in 1989, and is listed in the Catálogo Oficial de Razas de Ganado de España in the group of autochthonous breeds in danger of extinction. The FAO lists it as “endangered”. In April 2011 the total population was reported to be 2995, of which fewer than 200 were outside the Balearic Islands. A breeders’ association, the Associació de Criadors i Propietaris de Cavalls de Raça Menorquina, was formed in August 1988.

The breed has remained agile and slender as it was not employed for agricultural work, for which the Balearic donkey was traditionally used.

The Menorquín may only be black, in all its variations; horses of any other colour cannot be registered. Limited white markings are permitted. It is harmoniously made, tranquil and obedient, noble and elegant. The average height is 1.60 metres (15.3 hands), and the minimum permissible height 1.54 m (15.1 h) for males and 1.51 m (14.3 h) for mares. The profile is slightly convex, the body and limbs long, the eye round and lively. It is strong and energetic, slender, powerful and muscular and suited to any type of saddle or driving use. Its most valued quality is its suitability for the traditional festivals of Menorca, where it is irreplaceable, and for the elevade and bot movements of the doma menorquina.