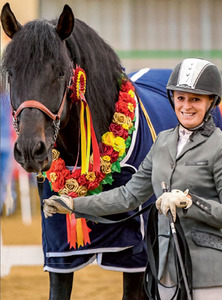 Each month we feature one of our members, to learn about their life with horses and other animals !

This month we are pleased to share an insight into Rebecca Brennand and her wonderful Lacayo I Reyo.

What dreams are made of ...

It doesn’t matter what dreams we have with our horses, a hack down the road, a Grand Prix dressage test, galloping around Badminton or getting to HOYS, SICAB or GBPRE! We all dream of that weekend, week or even just that day

when it all comes together!

Like a lot of other little girls I grew up with posters on my wall of Spanish stallions and was fortunate that I was able to get involved with PRE horses many years ago. Over the years I have enjoyed success with my previous horses Barquero JF and Albero LXXX but the coveted title of Champion Stallion I had read about in the PRE magazines for  so many years still eluded me as it does many others, even the top UK studs!

My ultimate dream is to ride down the centre line competing in a Grand Prix dressage test on a PRE horse, that’s it, just that, nothing fancy ,nothing too outrageous, no medals, no championships! This seems quite achievable but when you add a busy lifestyle into the equation, the poo (polite word) the weather and generally running a home etc it becomes much harder, then add into the mix a little person to look after that dream can become just that, a dream.

I had searched for 2 years to find my next partner in crime and soon as I sat on Lacayo I Rey I knew he was special my words were “there’s something in there” I couldn’t really explain beyond that but I knew he was going to be special.

It wasn’t long after Lacayo I Rey arrived in the UK that I read about the TRC/TQB Calificado Grading event that was being held in July 2019, this was the first time for this type of grading in the UK and it was unsure when or if it would happen again, We as a family spent many months thinking and debating on was it something we could achieve financially and Rey physically, I knew he was a good horse with an excellent pedigree, but could a mere mortal like myself pull it off professionally enough to do him justice? I didn’t want a professional handler handling him as it honestly terrifies me the speed, stress, exuberance call it what you want that they have the horses going at and I really wanted that bond between us to keep improving in everything we did. My paranoia and inexperience as those guys do a incredible job made me doubt myself if I could get anywhere near their standard to show him off correctly! After long talks at home we came to a decision, if I wasn’t good enough so be it we would still love him and we knew where his future career was going even without the prestigious title. So we decided to go for it in for a penny in for a pound as they say!

So the day arrived for his grading. The morphology section was first and although I had tried to get myself fit (running) in the weeks before I still got seriously out of breath in the ring those nerves really take a lung away! I felt I hadn’t shown him off as much as I possibly could have but we still did it and then went onto the ridden part of the grading which we excelled in . After a long and exciting day at Hartpury we got the news that Lacayo I Rey had passed and was now a calificado stallion. I still pinch myself that I own him, wow  just wow! I’m a very Proud owner, handler and rider!

A few days later we set back off to Hartpury for the GBPRE Championship show in our new lovely but a lot smaller 3.5 ton for the 3 day show. Me, Rey, toddler, mum and a huge amount of stuff with hubby Chris travelling down after work! This was Rey’s first stay away show which in itself can be daunting and upon arrival he was behaving like a wild stallion and was typically only thinking about his manly urges! Friday morning I arrived to

a trashed stable, poop everywhere and with a toddler in tow who was still a bit tired from the journey and wasn’t really interested in my ideas of fun, I was least to say a bit overwhelmed! Then it got worse after scooping more poop and moving his bedding round trying to make it look like a respectable horses bedroom my shavings fork picked up a much heavier object than a normal lump of poo… Oh no a shoe! How can a horse pull a shoe off in a stable?!! Whilst all this was happening next door Samantha Jo Tilley’s stallion was being very calm and unresponsive to any of

Rey’s “forwardness” he was a perfect neighbour! Toby Crocker came to the rescue and refitted the shoe which I was and still am eternally grateful. Thank you Toby. So upon the arrival back at Rey’s stable Rey takes on the butter wouldn’t melt approach and I realised I only had 40 mins to plait, get on and warm up for our first test of the show the Sevilla.

He was distracted to say the least and after a very average test I wondered if I’d done the right thing bringing him to this big show in his first year of competition, maybe I was asking to much of him? As the day/days progressed I watched him grow as a individual and become more confident and more grown up! It’s only now as I look back I can really see this as these things can get easily lost in the moment especially at a very large show. The Morphology class was up next and I prayed I could keep 2 lungs working this time. We came out of the morphology in a  respectable 3rd position, dared I think we could stand a chance of pulling up any positions in the Functionality? If not I was made up with 3rd place. After a decent functionality test we couldn’t do anymore! With the rest of the day being a massive rush with little people, jobs, ridden showing which he was also a total star in and won, I hadn’t had chance to view the final scores for morphology and functionally combined. An announcement was made that I had to go into the main arena under saddle and if I’m totally honest I had no idea what was going on! Everyone got pulled into place in reverse order in my head I believed we were 4th, but then 4th got pulled in then 3rd then 2nd and it was just me and my boy left, we had done it we got 1st place wow OMG! After a very long eventful day Rey had a well deserved rest over night where he was now very settled. We also settled for the night after some serious playing of football and a little person streaking around the car park!

The final of adult stallions was in hand and after panicking I was going to need to hire another lung I was securely told we don’t need to trot up again. Our section was brought forward 1st, 2nd and 3rd I believe but I was a bit lost as to who was who at this point. I was asked to come forward and Rey was looked over with a fine tooth comb then we were promptly sent to back so I gave up on any hope that we had a chance of champion or reserve champion! It came to the point where the Champion Stallion was being announced over the tannoy and to my utter amazement it was announced that Champion Stallion for 2019 was Lacayo I Rey, I nearly passed out! It felt like a dream I was stood holding the champion stallion and despite only owning half a lung and 2 very short legs we had done enough to claim this title, what a horse! What a horse!

To top off the weekend on Sunday Rey walked away with supreme Champion ridden PRE! So with a very tired horsey and toddler but a huge smile on all our faces we set off home! This was Rey’s first year competing and including all of the above he qualified for the BD regionals, area festivals and the BD National! He also qualified for the MCI European championship in Paris and come a respectable 4th in the National MCI championship. We were selected to represent the UK in Paris but I decided that he had done enough for one year he had nothing to prove and had answered all and more than I could have dreamed of! This horse is incredible and I can’t wait to see where our future take us! Here’s to the future!